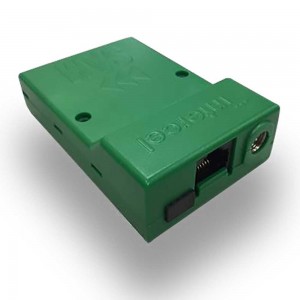 SAMX is the latest modem from Intercel, featuring the new Cat M1 and NB-IoT 4G t...

Intercel’s 4G Cat M1 serial modems provide reliable connectivity for serial devices using the latest 4G Cat M1 technologies. They can also be used as USB Modem’s, to provide connectivity to devices over USB. Widely used in the metering industry, the modem has an RJ-45 connector for both RS-232 and power supply. The modem has no exposed conductive surfaces once installed, to offer additional safety when working with high voltage.

Built into the modem is an onboard processor running Intercel’s TCP/IP stack. The processor adds additional features such as Dynamic DNS and Remote Access, and lets the modem act as a either a smart modem or as a dumb modem depending on what is required for your application.

The CatM1 and NB-IoT modems offer extended range over conventional Cat 1 modems, at a more competitive cost but with less speed. For applications where speed and latency are more important, then our 4G Cat 1 modems such as the SAM4Q and SAM4T would be more suitable. Cat-M1 is best suited for applications where only a small amount of data needs to be transmitted per day, such as metering.

The SAM4X modems are the latest in a series of serial modems stretching back to 2G cellular – it is a proven and reliable solution for mobile connectivity, with an excellent track record. You can easily install the SAM4X modems in place of the 2G and 3G versions, as they have the same form factor and utilize the same connectors and a comparable AT command set.

The SAM modems use industrially rated components and operate over a temperature range of -30C to +85C. They are connected using either RS-232 serial or USB and run from a supply voltage of 5V DC to 32V DC.

Since arguably the 3G era, the number of devices with 3G and 4G connectivity has expanded significantly. Not just phones, but also watches, tablets, laptops, computers, alarm systems and even home broadband system are all now available with 4G connectivity. This has resulted in a higher demand placed on the 4G infrastructure than in the past, but also in a demand that is diverging between applications requiring high throughput and performance – phones and home internet – and applications that require very little throughput but prioritise a low cost and a long range – applications like metering and remote monitoring.

The response to this requirement for 4G LTE is the new and competing CAT-M1 and NB-IoT standards. Both standards are fundamentally similar to 4G Cat 1 but are designed to use a much narrower chunk of bandwidth. This allows the carrier to attach more devices to the same tower and thereby lower costs. These modules are also designed to consume less power than conventional 4G Cat 1. Cat M1 and NB-IoT still use the same spectrum as Cat 1 and other conventional 4G technologies, but they use it less often and they use less of it. Our Cat M1 and NB-IoT modems are Band 28 industrial modems.

Intercel offers two products for the Cat M1 and NB-Iot market – the SAMXQ and the SAMXT. Both products are serial modems, and both support both NB-IoT and Cat-M1. SAMXQ and SAMXT are both NBIoT serial modem’s and 4G CATM1 serial modems. The end user can change the devices mode with an AT command. Both products support Band 28 on the Telstra Network (also called 4GX) – they are both Band 28 modems.

We do not currently plan to release a Cat M1 or NB-IoT ethernet modem. Ethernet applications typically need a higher speed connection than is available on Cat M1 or especially NB-IoT. For customer needing a Band 28 modem router, we would recommend our eSAM or Ultra eSAM modem routers. These Band 28 industrial modem routers are available with Cat 1 through Cat 6 performance.

Those needing a 4G CAT M1 industrial serial modem will find our SAMXQ and SAMXT to be best suited. These modems are equivalent to our SAM4Q and SAM4T but utilise a Cat M1/NB-IoT module instead of a Cat 1 module. Otherwise, the modems are functionally the same.

Before deploying a Cat-M1 or NB-IoT solution, you must consider the requirements of your application in terms of bandwidth and coverage. This is especially true for NBIoT serial modem applications, as the NB-IoT network is not yet widely deployed and as the modem cannot fall back to conventional 3G or 4G service. While NB-IoT is an attractive technology for metering, especially water metering, you must ensure that the low speed of the technology is still able to meet your requirements. Industrial NBIoT serial modems are not yet supported with Telstra or Optus as they have not deployed Nb-IoT to their network, but it is supported with Vodafone.

4G CATM1 serial applications are somewhat simpler to consider. Cat-M1 is slower than Cat-1, but it is not as drastically slow as NB-IoT. This means it can be used in more applications. Cat-M1 is also already deployed by Telstra on many of their base stations (including Band 28), so coverage for Cat-M1 is better. As fall back to 3G or Cat 1 is not possible, coverage would not be as good as 4G Cat 1. This is offset somewhat by the longer range and better penetration of 4G Cat-M1. You may find some situations, such as underground structures, where Cat M1 can get a signal but conventional Cat 1 cannot.

Band 28 (700Mhz) is a key spectrum for the Telstra network. Because of its relatively low frequency, this band offers excellent range and provides coverage especially in regional or remote areas. Intercel has a range of Band 28 industrial modems and Band 28 modem routers including the SAM4, eSAM, Ultra eSAM and now SAMX modems. While these other Band 28 modems also include 3G coverage and coverage for numerous bands, Cat-M1 and NB-IoT only have coverage for a limited range of frequencies and no 3G fall-back. Fortunately, Band 28 is so widely deployed that you still get excellent coverage without these extra bands.